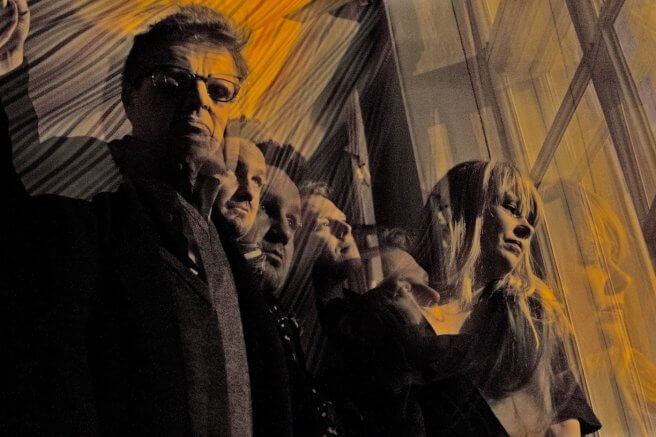 Imagine a nightclub in London in 1964 or 65. The air is thick. The temperature is high. A cloud of smoke hangs above the sweaty bodies of a bunch 20-somethings gathered to see a concert. They clap their hands and stomp their feet while the band on stage plays an upbeat R&B with raw power. The electric guitar screams and the singer growls. The music invokes primal instincts and the audience has never seen anything quite like that. Everybody is living the blues. Lust. No more I wanna hold your hand.

This black and white sequence is what Them Bird Things evoke in their newest album, titled Stephen Crow Must Die. The 16 tracks that make up the album feel louder and rawer than any British Invasion group ever was.

True to their DNA, Them Bird Things have ditched the acoustic guitars and mandolins of their previous albums. No more storytelling folk-rock songs. Forget the country. After a triptych (Wildlike Wonder, Pachyderm Nightmares, The Bride Who Came to Yellow Sky) that painted a peculiar, twisted Americana of tall tales and lovable losers, it only seemed right to return to electric instruments. “There was nothing else to explore”, tells me producer Will Shade after one mixing session earlier this year.

Simply put, Stephen Crow Must Die is only rock and roll: choruses, hooks, stinging electric guitars. It uncovers many tones of rock. Songs like “House of Stone” and “Love Is a Vendetta” shine with hooks and pop melodies, and the muscular guitar of “Alcoholocaust (I’m Drunk Again) blows the speakers off while Salla sings with lust. “Slim Harpo Sez” ticks the boogie blues off with their take on Harpo’s own “Shake Your Hips”. The nasty guitar solo in “Call Me Calamity (The Great White Hope) opens a gateway to the deep corners of our mind, which eventually is fried with the slow-burning, bad-tripping “Let Us Burn”. Fortunately, a school bell rings before the closer “Wife of Bath” returns us to sanity.

Two instrumentals anchor the record. The original “I, Julius” soundtracks a manic road trip fueled by illegal stimulants and police sirens. The cover of Manfred Mann’s “Why Should We Not” invites us to look at our doppelgänger in the Black Lodge.

Few records can pack such diversity of rock songs and avoid cliché. The band’s secret weapon —or rather weapon of mass destruction, is vocalist Salla Day. Where early albums saw Day putting the dark spirits of the blues into the country, this record allows her voice explore uncharted territory. Lacking the lungs to be a powerhouse like Brittany Howard or a scream-fest like Janis Joplin, Day sings with such refined subtlety, able to convey the full spectrum of human emotions, from a world-weary sensuality to an effortless playfulness. In the current musical landscape I can only think of Erika Wennerstrom of the Heartless Bastards as an equally engaging and peculiar female rock and roll singer. Think of Judy Henske joining The Yardbirds circa 1966.

Surprisingly enough, the vocalist did not think twice about stepping out of her comfort zone and sing rock and roll songs. “I’m usually a control-freak, but this time I had a very hands-off approach. Everything’s going to be ok, I told myself. It was easy to sing these songs”, Day admits.

Any grandiose rock album must have a guitar hero. So, please, welcome Mr. Julius Heikkilä, the new guy in the band. Freed from any constraints, pushed to invent new sounds, his work is outstanding all over the record, playing with such versatility. No room for blues and rock clichés. As producer Shade told his guitarist: “play less Robert Cray and more Link Wray”.

The creative process of Them Bird Things is much about doing things the most fucked up way. Or say, creatively different. Expect the unexpected. That being bagpipe solos or crossdressing for promotional photos. For this album, the band came up with an idea to make the recording a bit more complicated. It’s 2017, so why not to go analogue and record on tape? Coming by tape and analogue recording equipment is not simple these days. Just on time to start the recording sessions, producer Will Shade lucked out when he acquired a bulky tape machine at a a Finnish Broadcasting Company auction.

“Gentlemen, we’re rolling”, says Salla Day before launching into “In the Shadow of Mulatto Mountain”. That moment halfway through the album invites you into the studio. Stephen Crow Must Die captures a group of people playing together in a tiny room. That’s exactly how the recording happened at Cat’s Pajamas, the band’s own home studio by the seaside in Southern Helsinki. In the old wooden house, much of the music was recorded live, and tape adds an extra layer of warmth to the sound. “We rehearsed there and we taped all the time. Whenever we had a good take, that was the beginning of the actual track on the album. And, we played loud and when [drummer] Affe Forsman can bang the drums, he’s at his best,” explains bassist Tapani Varis.

As a result, there is a sense of fun and joy. “It was a fun project. Not much stress”, says Salla Day. Stephen Crow Must Die is focused and cohesive album, more than anything the band has recorded before. It’s a band album, not just the sum of parts. As such, all the originals are credited to Day, Forsman, Heikkilä, Shade, Varis. This reflects the spontaneous approach to songwriting and recording for this album. “When we started writing songs, the situation was very open. Kind of what do you feel like playing?”, says Heikkilä.

Music writer Jean Ramsey says in the liner notes that this album is a rebirth for Them Bird Things. But I think rather than a phoenix rising from the flames, Stephen Crow Must Die is another consequence of the free-flowing nature of the band. In both genre and personnel. Another step, another left turn in their already decade-old career.

But who the fuck is Stephen Crow?

The secret is out in the open. Just take a close look at the credits, and use a Finnish-English dictionary, if needed.