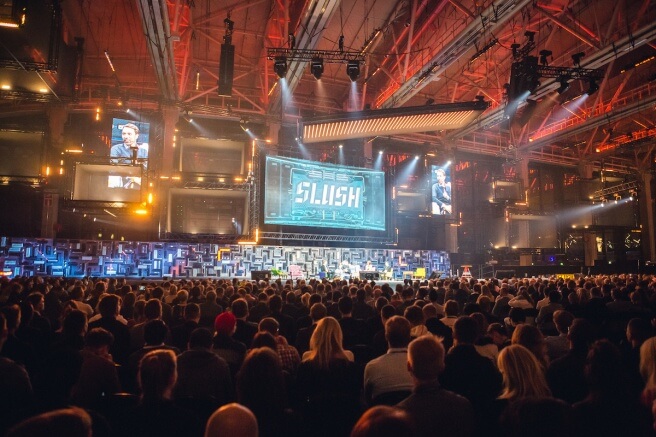 Thousands of entrepreneurs, top-tier investors, tech experts, journalists and curious minds are gathering next week in Helsinki at Slush, one of Europe’s leading startup events. With more than 15,000 attendees from over 100 countries, a vibrant atmosphere, epic late-night parties and food trucks, the event resembles a music festival rather than your usual networking conference. Plus, this year, tech and music are meeting at the parallel event Slush Music.

To soundtrack the event, Nordic Playlist is heading to Helsinki and setting up its famous Radio Bar with live performances and DJs playing the official tunes of Slush. In person or online you can tune to specially made broadcasts exploring the rich musical landscape of the Nordics.

Alternatively, I have a compiled a bunch of songs to present the finest music produced in Finland at the moment . So here it is, the unofficial Slush 2016 playlist. Enjoy!

Since the release of their first EP, I have a soft spot for the melancholic pop songs crafted by Delay Trees. Nearly ten years into their career, the dream pop foursome is ready to release their forth album Let Go, sometime in early 2017.

On their sophomore album synth-pop duo Villa Nah pay tribute to the 80s with some retro beats. The lead single Spy is based on the theme music by Nicholas Scarim for the 1984 computer game Spy vs. Spy. This is the ultimate anthem for a tech conference.

With a love for end-of-summer melodies and fuzzy guitars, four-piece band Black Twig construct crystalline guitar-driven pop songs. They remind me a bit of Teenage Funclub with a little bit more of noise. Their newest album, Blaze On A Plain, is one of my favorite indie albums ever to come out of Finland.

Mikko Joensuu – There Used To Be A Darkness

If you lose your religion, you might as well go to a cabin and write songs until you have three albums worth of materials. Mikko Joensuu’s solo debut is a trilogy of albums, Amen 1, Amen 2 and Amen 3, composed in the aftermath of losing faith. There Used To Be A Darkness is the centerpiece of part two, an 11-minute epic of guitar noise and steady groove that carries the singer’s emotive voice. Simply brilliant.

Teksti-TV 666 could be the most extravagant band you’ve ever heard. Combining punk and krautrock (krautpunk?) and armed with four, five and at times, six guitars, the band builds a deafening, mesmerizing wall of sound. Hard stuff or as Finns say… kova!

Electronic pop duo Cityman combine 80s synth pop and modern dance music with the Scandinavian minimalism sensibility. The duo never loses sight of what pop songwriting is and the tunes are tremendously catchy.

Led by the genius of drummer Olavi Loihivuori, Oddarrang explores uncharted territories in the intersection of classical music, post-rock and jazz. Cinematic expressions which remind me of other Northern sounds like Sigur Rós.

The Hearing is the moniker of singer Ringa Manner, who creates hypnotic loops and harmonies to make your head spin.

Lake Jons play a modern take on folk-rock. Birthed in the Finnish woods, the vocals and harmonies might make you think of Bon Iver’s early work. I’m looking forward to the trio’s debut album, which should come out sometime next year.

Jess and the Ancient Ones – In Levitating Secret Dreams

If you are wondering… yes! There are still plenty of dark hard rock and metal bands in Finland. Jess and the Ancient Ones built on the tradition of 70s psych rock with the purpose of exploring the magical realms beyond the mundane.

Drawing inspiration from both jazz and punk, Mopo are a pretty funky bass-drums-saxophone trio. The music follows the free flow of jazz, even though things might get a bit anarchic at times.

There’s a strong generation of Finnish rappers nowadays. Many rap in Finnish, but Juuso Ruohonen aka View uses English language and adds a dark tonality to the music that set him apart. Catch him at the Nordic Radio Bar during Slush Music.