The Holy – Ramses The Evil Brother 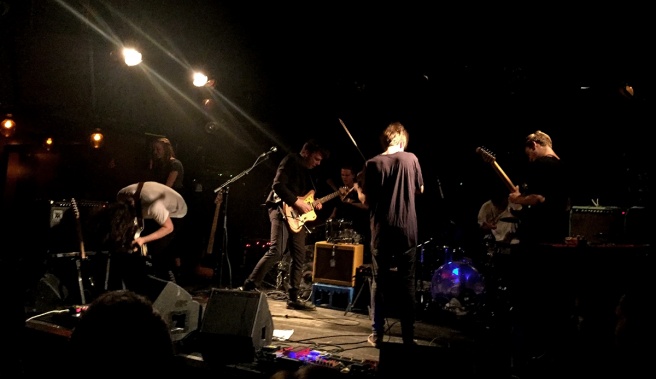 A couple of weeks ago, Kuudes Linja hosted a very interesting double bill with two of the most acclaimed new indie bands in Finland: Lake Jons and The Holy. Until that night, I hadn’t been able to see them play live, so this was the perfect occasion to catch up.

I’ve written about Lake Jons before and despite the drum machine, their show was solid. However, I was not prepared for The Holy’s performance and their bombastic sound. Fueled by two drummers, the six-piece band builds a chaotic wall of sound that somehow avoids beings a total train wreck. The band’s music is hard to describe. Equal parts light and darkness, the songs have a tremendous anthemic quality. When attending to gigs in bars or small clubs in Finland, it’s not usual to see a young indie band play with such confident. Even when the songs are good, many bands are timid and self-effacing on stage. The Holy are just the opposite: bold and and daring. The stage at Kuudes Linja felt too small and their big sound easily quiet the usual bar chatter. I’d be surprised if I don’t see The Holy on bigger stages in Finland and abroad very soon.

The Holy have just released their debut EP entitled More Escher and Random Notes. The recording is much more subtle than the live performance and you immerse yourself in the peculiar soundscapes and textures, whilst feeling the band’s energy.