What the hell are they building in there?

So, you walk along darkened corridors. It descends into the guts of an ice hockey rink, but in your mind it could be a secret military lab. Or a bomb shelter in times of war, you think. You can’t see well, your eyes are adjusting to the darkness. It’s bright and sunny outside. Boys and girls wear flowers in their heads. Well, this is a summer festival.

The Dead C. That’s the name of the band you’ve come to see in this basement. Who the fuck are The Dead C? “From New Zealand. Some of noise rock’s chief architects, featuring primitive experimental rock stylings and cerebral conceptualism. The group performs infrequently outside of their home country”, you read in the internet. Right. A dark, cold basement. That’s were this band belongs, among the echoes of a puck sliding across the ice and broken teeth. You can almost taste the sweat and the blood.

Is there anybody out there? Did anyone come to see this band? There are around 300 people around you when you arrive. 300 out of 8,000 festival goers. Maybe 50 of them know the band. Their most popular songs accounts for nearly 5,000 plays on one of those streaming services. Who cares? The reason you are able see The Dead C play is because thousands of people pay to see a Norwegian pop star. Or that heavy metal band for vanilla people. And, because they drink 45 euro bottle of wines. Otherwise nobody would book this band.

Soundcheck blends into the actual show. You don’t know when one starts and the other ends. It’s a journey through noise. Guitar chords and a primal drumming, almost visible through the purple stage light, like thunder breaking the clouds. The light is so thick you barely see the shape of the bodies. Who the fuck is Mick Jagger? reads the guitar player’s T-shirt. Who the fuck are The Dead C?

The Dead C. What does it even mean?

The music is amorphous. A wall of noise, slowly built chord by chord. Distortion fills the air. The singer does not sing. He moans. Tat-tat-tat. Your eyes are fixed on the drummer as he hits the snare drum hard. Tat-tat-tat. The sound is dry and dark. Sand in your mouth. 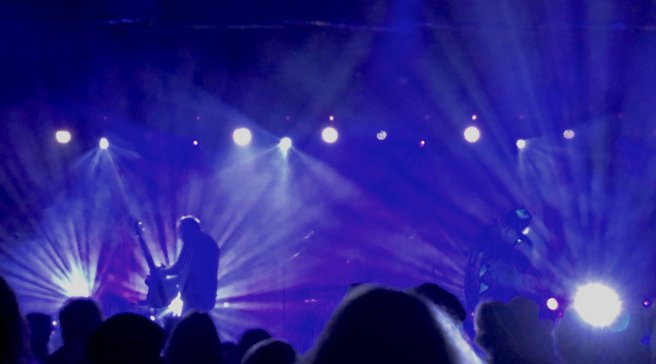 Grab a beer. 10 euros, please. Wait… Is it God’s piss? The bartender dismisses your question with a shrug and gives you a warm bottle of beer.

Tat-tat-tat. The music does not stop. There are no breaks between songs. Music is a continuum of noise. Is it all one song? Hypnotic, deafening, awesome.

Look to your right, look to your left. There are less people around. Who wants to see this? Who wants to be in a dark basement? Let them go and eat there 15-euro vegan food or their 12-euro burrito. Yes, that one you ate before. The burrito that tastes like a kebab bathed in mayonnaise.

The snare drum continues. Tat-tat-tat. The same purple light. There are no song. Who cares about songs? Nobody will remember any songs after the festival. It’s a songwriting crisis. Just mix genres, make noise and play stages larger than your talents. Is there pop in music? Do The National care about melodies?

You hear one song you like. The heavy metal band for vanilla people play an AC/DC song. They say it’s tribute to Malcolm Young. Malcolm Young is dead, David Bowie is Dead, Tom Petty is dead, and the son of a bitch of Lou Reed is dead.

That’s why you don’t need songs. Everyone is dying. You only hear the snare drum. Tat-tat-tat.

The noisy guitar have pierced your ears and your brain. Your tinnitus can’t get any worse. It won’t go away like it won’t that snare drum. Tat-tat-tat.

55 minutes after soundcheck the show is over. Your mind is blown, but nobody will ask for an encore.