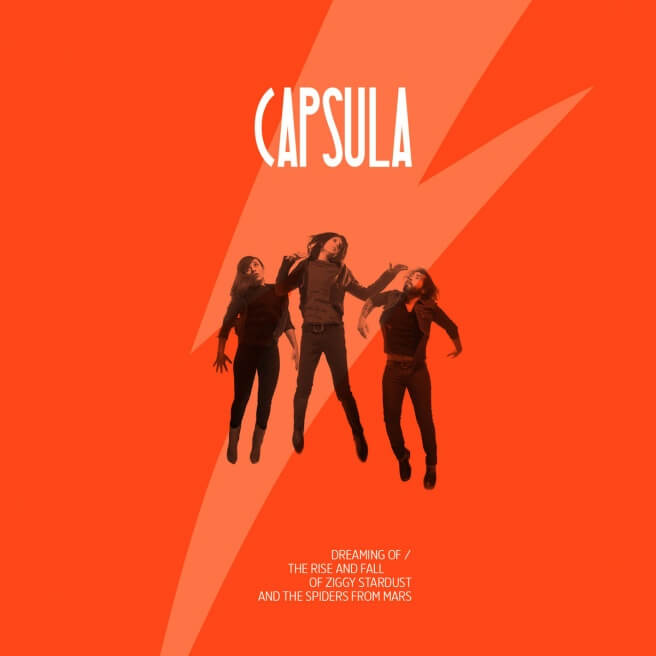 Like many others I’ve been revisiting the music of David Bowie -even finding some love for Earthling. Many musicians and artists have paid tribute in one form or another. But one of my favourite Bowie tributes is not that new.  A few years ago, an Argentine band called Capsula recorded a frenzied version of one of Bowie’s most charismatic album, Ziggy Stardust, from start to finish.

Originating from Buenos Aires, Argentina, but based in Bilbao, Spain, rock trio Capsula present some energetic and  psychedelic garage-glam and with ten studio albums they’ve become an important name in the underground rock scene. Praised by Rolling Stone’s David Fricke, the band recently opened for Pearl Jam during their most recent South American tour. Just on time for Capsula’s next studio album, Santa Rosa, out this spring.

Capsula have always shared their admiration for Bowie. Nonetheless, the band’s name is inspired by Major Tom, and in their most-acclaimed album to do, Solar Secrets (2013) was produced by Bowie’s long-time collaborator Tony Visconti.

As it often happens with cover albums, some songs are better than others. Perhaps the highlights are Lady Stardust, which gets some South American psychedelia, and Hang On To Yourself played with some Ramones feeling.

More than a simple curiosity, Dreaming of Ziggy Stardust is very solid tribute, bringing a contemporary approach to the album. A bit more lo-fi, garage. A bit dirtier. Equally rocking.

This and other Capsula albums are available via Bandcamp in vinyl and digital versions. Check out below the album’s trailer and a live version of Suffragette City.