Ten curiosities that Them Bird Things taught us 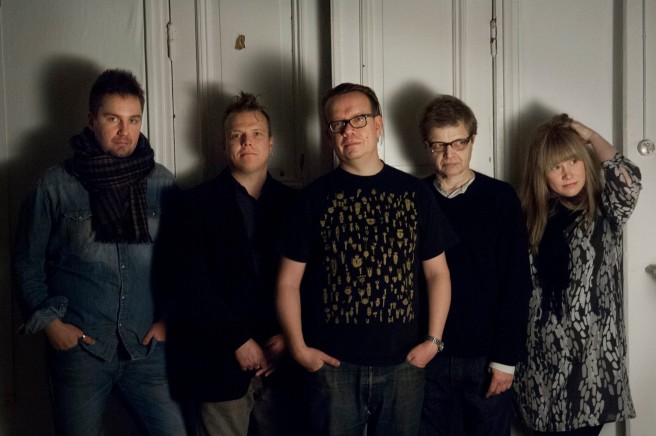 Shut up and die like a bluesman! With this motto, Americana band Them Bird Things have  just released their fourth album, called The Bride Who Came To Yellow Sky. Like their previous full-lengths, this is a collection of careful crafted songs that use an extended sound palette based on traditional (and also less conventional) blues and rock sounds and dig deep into American folklore. Think The Rolling Stones and The Byrd in 1969, think Bukka White, think Chuck Berry and Little Feat’s timeless sound.

Vocalist Salla Day and her band, with the help of producer Will Shade, have an ability to compose literary songs that tell tales of far away places, in time and space, places populated by peculiar characters and where bizarre is common. Who’s heard of an elephant lynching? It is a strange world, indeed.

Musically and lyrically, the 14 songs in The Bride Who Came To Yellow Sky contain many details and secrets. Besides the core foursome, the tunes include many adornments and instruments (fiddle, wielding tuba, clarinet, saxophone, tabla, kantele, piano, harmonium) that welcome a myriad of characters: lonely widows and 19th century immigrants, Philip Marlowe and Lon Chaney, forgotten blues singers and that teenage couple living the moment preceding Springsteen’s The River.

Read on (and hear some of the songs) to find out some of the things this album will teach you.

By the way, the album release party is this Thursday at Nosturi in Helsinki. Be There.

Before recording this album, singer Salla Day celebrated the arrival of her first born, and obviously, this fact had a great effect on the music and the songs. The album was recorded in the band’s home studio so the presence of the child is felt at all times. As Salla herself tells on the liner notes to the album “Somehow, there was a child’s presence on all these songs, literally and figuratively. If my son wasn’t kicking in my arms as I sang a guide vocal, [guitarist] Arttu’s two children could be heard giggling in the background of the demos he would send me”.

However, this is not an album for kids or about childhood, but a very adult one that works at many levels. One of the underlining themes of the album is what having kids can do to you as a parent. Sometimes it’s not fun. As Salla points out “children also provide plenty of opportunity to worry and experience grief. Those grim undercurrents flow through some of the tunes.”

2. The Night of the Hunter

What a bold move to start an album with Walter Schuman’s eerie lullaby that appeared in the classic Robert Mitchum film noir The Night Of The Hunter. With Salla Day’s haunting vocals and the sparse dark instrumentation, this cover is equally frightening as the original.

Pre-war female blues singer, Memphis Minnie, aka Lizzie Douglas, inspired the song City On The Hill. However, the final lyrics would come to be about decadence and corruption in modern America. The song is a great continuation to Pretty Fly.

The most playful songs comes half way through the album and it is one of Uncle Remus’ folktales in which Brer Fox wants to capture and kill Brer Rabbit, tricking him with a doll made of tar and turpentine. Isn’t it a great theme for a song?

Another pre-war singer. With Ma Rainey and Bessie Smith, Lucille Bogan was one of the the big three ladies of that era. She sang vaudeville songs and piano blues, but by 1930, Lucy Bogan songs began to concentrate on drinking and sex. Forget about any parental advisory stickers, Bogan sang some of the filthiest songs you have ever heard. I guess that was nightlife at the juke joints in the Mississippi.

Guitarist are in for a treat with the new Them Bird Things record. Guitarist Tapani Varis uses a diversity of tunings and producer Will Shade explains a little bit more about them:

”City on the Hill” B-part guitar on an Epiphone Dot: EBBEBE

”Child of Sabbath” on an acoustic D15M Martin: DADGAD

”Decoration Day” two bowed guitar tracks in C-part on Epiphone Dot: forever a mystery since both the guitarist and producer failed to take note

”Hurry Down Sunshine” on an acoustic D15M Martin: Spanish tuning in F

”Early in the Morning Again” on an acoustic D15M Martin and 12-string Danelectro: DADGAD

”The Bride Who Came to Yellow Sky” on a Danelectro 12-string guitar: DADGAD

Also of interest to guitarists perhaps, the Epiphone Dot and Danelectro were both strung with Pyramid flatwounds.

This one goes deep into the American history, but the song is not pretty or heroic. Decoration Day precedes the traditional Memorial Day in the United States to honor men and women who died while serving the military. Them Bird Things treat this theme very differently and composed a very sad song, about loneliness, about a dying woman who spent her life alone after her husband and son died in the different wars.

This is the first Them Bird Things album to include a good amount of keyboard sounds. On a variety of songs we can hear a 1947 Hardman piano and a ’60s Philips organ, the same kind employed by the legendary ‘60s garage band The Monks, one of producer Shade favourites.

Them Bird Things recorded this new album the old way, straight to tape, adding an extra layer of warmth to their sound. Do yourself a favour and do not settle with a low quality streaming version of the album. Go get a physical copy.

The album artwork is based on photographs by Susan Woodmansee in the Badlands area in South Dakota. The photographer’s work with time-lapse images also serves as the video for the album’s first single. Watch below and you will probably want to travel there.