Record Store Day 2016: Shut Up And Take My Money 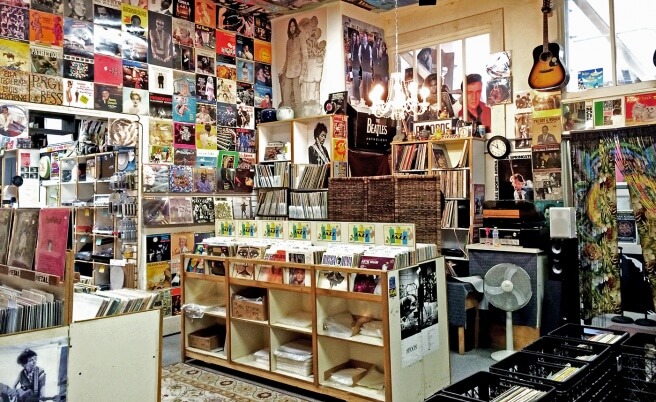 This Saturday is the ninth annual edition of Record Store Day and, yes, like many other obsessive record collectors, I will also be in line early in the morning, ready to spend my hard-earned savings in a bunch of exclusive releases. Any day should be record store day, but the third Saturday in April has gotten a little bit more significant. At least it’s a day when record shopping becomes mandatory, because you have to support your local record store, right?

Yes, originally, the event was created as a way to support indie record stores, but in the last couple of years criticism is increasing and questioning if RSD really helps record stores. The exclusive releases that attract buyers in the first place are also killing all the fun. Prices are becoming ridiculously high, speculators are buying the specials release, which hours later (or even before RSD) appear on eBay and Discogs with an even higher price tag. A good amount of money that should support record stores goes somewhere else.

The whole Record Store Day idea has gotten a little bit weird. Instead of spending time in the record store, buyers and collectors, like old ladies on the sales opening day, are storming into the shop to get their hands on the exclusive releases, elbowing their way through. But If they don’t luck out at the store, there’s always the internet. Or in the worst cases, those eager buyers will sell what they just bought to make some easy money from other eager record collectors.

Nevertheless, for good or for bad, people are spending good money on records. That should be good.

The exclusive and limited release are also a nightmare for collectors and completists. As not every release reaches all markets, it gets difficult and financially painful to get ahold of some releases. If you’re like me and want to have everything from your favourite, RSD is nerve-racking, it creates voids in your collection.

This year, the item I’m anxious for is the reissue of the Heartworn Highways documentary and its soundtrack. The film, which covers the beginnings of the outlaw country movement in the seventies, comes in hand crafted custom wood box, an LP-sized 80-page book, bonus DVDs and a double LP of whiskey coloured wax. I just want it. But this release is limited to 1 500 copies worldwide and none seem to be reaching Finland. Heartbreaking.

Of course, I could skip going to any stores on RSD and invest my money on one of the Heartworn Highways copies that I’m sure will be on eBay early on Saturday. Will I do that? Of course, not. There are plenty of other goodies to find.
Looking at what will be released in Finland, this is my shopping list.

The Nuggets compilations are essential for any fan of the first psychedelia era. This one was first released in 2004 and includes a selection of 24 obscure psychedelic and garage songs from the mid sixties. The original release has been long out of print, so this is a a very good opportunity to get this album before it’s gone again. What makes the deal sweeter: it comes on purple marbled vinyl.

Only a band like Big Star would make a comeback in a place in the middle of nowhere like Missouri University. In the nineties, Alex Chilton and Jody Stephens reformed Big Star with the help of The Posies Ken Stringfellow and Jon Auer. The first reunion show is not published in its entirety in a double LP.

V/A : The Other Side of Sun: Sun Records Curated by RSD, Volume 3

One of the highlights of record store day has been specially curated compilations from the Sun Records catalog by participating record stores. This year, the release is even more special as it focuses on obscure soul, garage, and psychedelic gems, rather than the classic rockabilly sound associated with the label.

How many Grateful Dead albums can you have? Every record store day offers a Grateful Dead live album. These releases have unearthed less known shows, not available before. Now it’s time for a complete show from 1977 in a 4-LP box. The artwork is beautiful and the show has an incredible setlist (http://www.dead.net/show/april-25-1977), including New Minglewood Blues, Terrapin Station, Scarlet Begonias and Playing in the Band > Wharf Rat > Playing in the Band sandwich to end the show.

This is a case of total completeness. A random selection of recent Tom Petty & The Heartbreakers live cuts do not seem to make the most attractive exclusive release. However, this set, which includes covers of The Byrds, Little Feat, The Monkees and The Travelling Wilburys, will be a nice companion to the live anthology box set published a few years ago.

Game plan: where to buy first?

How to get my hands into these records? It’s not that easy as it seems. Some items will be available long after the day is over, but some others will just fly off the shelves in a matter of minutes. With all the record stores opening at the same time, what will be the best place to start?

Fortunately, there are still a good amount of record stores in Helsinki, and a few of them are RSD participating stores. On their websites and Facebook pages, Black & White, Keltainen Jäänsärkijä and Levykauppa X have at least partly published the list of records they’ll be selling. But can I trust those? What if something has not be announced? Where will be there the bigger lines?