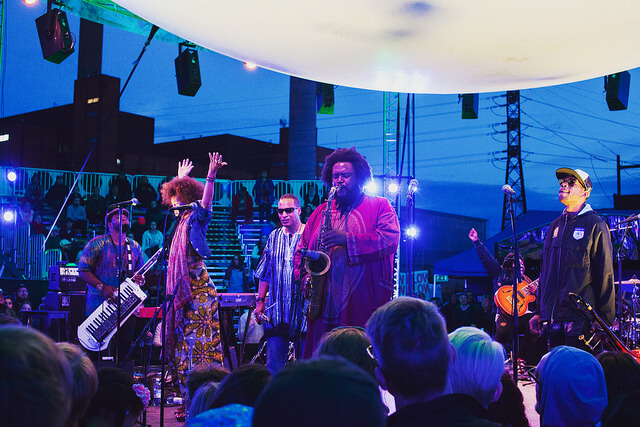 Halfway through his set at Flow Festival, saxophonist Kamasi Washington gave center stage to bandmates Tony Austin and Ronald Bruner Jr. before they performed a thundering drum battle while the sun was setting in Suvilahti. It was a fascinating wordless dialogue that Kamasi introduced by telling a couple of innocent stories of his and his bandmates childhood days in Inglewood, California. He told how he met Ronald in school, realising both had already met in kindergarten after seeing an old photo together. Kamasi also remembered how Tony Austin, a few years older, was perceived as the cool kid, after friends suspected he spent a night with a girl while the rest of the gang were just happy meeting in the morning to watch Teenage Mutant Ninja Turtles cartoons.

These stories proof the camaraderie of a bunch of like-minded musicians that have stuck together since elementary school, playing, growing up. Once they played in garages and schools. Now they tour the world.

When it was time for Flow Festival, I was quite obsessed with The Epic, Kamasi’s three-hour debut album as bandleader. Massive and glorious. That’s not saying anything original as every major publication, from The New York Times to Pitchfork, praised and wrote long pieces on the album and its creator. Certainly, The Epic is now one of those album you must include in your top ten list of the year if you want to be hip. I don’t care about that. The closing track, The Message, was my summer song this year.

I had marked in red the show at Flow: Sunday evening at the wonderful Balloon stage. Beautiful. Or… wait! Descendents were set to take a slot right before Kamasi Washington on the other side of the festival. Both shows almost clash and I really do want to see Descendents on their first gig ever in Finland. Unfortunate, but understandable who would want to see ageing punk rockers AND right after that a jazz band? Well, I would.

No panic. With some planning, both gigs were doable. I got to see most of Descendents shows (it rocked), except for a three or four songs, which was not more than seven or eight minutes. I ran across the festival area to reach a crowded Balloon Stage, right on time before Kamasi and band started playing. I didn’t get a nice spot, people were chatting, coming and going. Typical festival crowd. But I made it, and the show was excellent, with Kamasi and band playing over a gorgeous sunset backdrop.

Kamasi Washington’s band is a family affair of its own kind. Not only because his father Rickey Washington plays in it and is a musician on his own right, but also because many of the musicians are close friends. They grew up together in Inglewood playing music, discovering jazz, staying out of trouble, learning, jamming.

Playing jazz at an urban festival in Finland seems unlike for kids who grew up in a terribly violent area near Los Angeles, such as Inglewood in the 90s. Becoming somebody you’d just love to burn was the most probable option. Be part of a gang, deal drugs, make quick money, avoid jail, dodge a bullet. That was a likely future.

When Kamasi was born, Rickey Washington abandoned touring life to settle in Inglewood with his son. He always made sure Kamasi would stay out of trouble, keeping him busy with music. He built a home studio and let Kamasi and his friends practice and jam as much as they wanted. Better to hear a beat than gunshots and sirens in the streets.

During his teens, Kamasi kept practicing, focusing on the saxophone and turning his head to jazz. His talent was soon noticed. Veteran musician and music teacher Reggie Andrews recruited the young talents in the area for his Multi-School Jazz Band. Reggie asked the young saxophonist to join the band, and there Kamasi reunited with old friends and met several musicians with whom he would play in years to come.

Kamasi told me theses stories a couple of hours before the show at Flow. In a few minutes, he would sit-in during Thundercat’s show. We met in one of the containers that serve as meeting rooms near the backstage. He spoke slowly, with a soft voice. Over the last 18 months, he has told these stories many times before, but he was still happy to talk about the music.

“Being a musician brought us some kind of respect”, he said, “Gangs would let us be ourselves, as we were doing music”.

Thanks to music a young Kamasi Washington stayed out of trouble. Fast-forward a few years. In the fall of 2013, the saxophonist was set to record his debut album as a bandleader and things weren’t much different. They might have toured the world and be professional musicians now, but at heart, they are just a bunch of kids jamming. They call themselves the West Coast Get Down. To save studio time, the musicians locked in in the studio for 30 days with the idea of recording for several projects and albums at once. 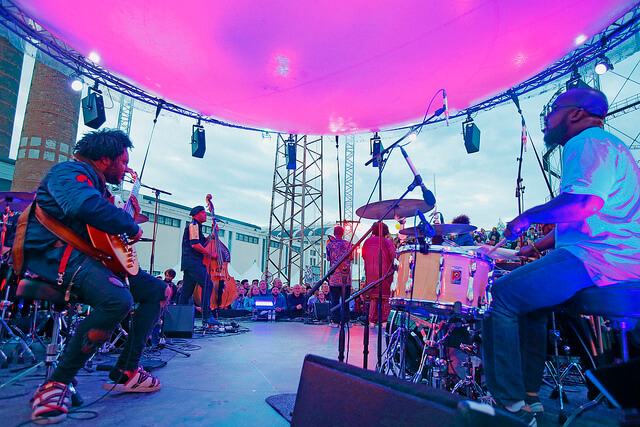 “We went to the studio for one month and we figured out of a schedule. From 10am to 1pm we would work on one record, then have a break and start playing a different record”, explains Kamasi.

The sessions ran almost non-stop during that month, often lasting from 10am to 2am. Bandleaders changed, music shifted, tape rolled. It was an explosion of music of cosmic proportions. When the musicians left the studio, they had recorded a total of 190 pieces. 45 of them were Kamasi’s. Those were the genesis of The Epic.

But the album was far from complete. What to do next? How to create an album from such vast amount of music.

“Shit, what am I going to do now”, Kamasi told himself right after the recording was done. “I had 45 songs that I thought they were great. But before I could start thinking about an album, I needed to distance myself from the music. I didn’t do anything with it for some months. Only after that distance I started thinking about the final arrangements”.

When the saxophone player got around to work on the album, he pushed things forward with the addition of strings arrangement and vocals that lifted the music to a whole new dimension.

As they say, the rest is history. The Epic has become a success outside the jazz circles. It’s is one of the most successful jazz albums in recent times and all of a sudden people who never listen to jazz have turned their attention to it.

I finish writing this piece in a coffee place in Helsinki (please don’t judge) one song off The Epic is playing. A new song by Kamasi Washington appears on the soundtrack of the Netflix series The Get Down. And, there’s still plenty of music to surface from the one-month long studio sessions. Jazz is cool. But, it always was, wasn’t it?