This year’s record store day is nearly here, that time of the year when record collectors drool over those fancy limited editions of new and old albums. Yes, me too. But dear record collector, we are not alone. Today, I start a new series of posts about my very own adventures in record collecting, record shopping, the pleasure of going through dusty racks of old vinyl among (usually) other middle age men, just looking for the special one (record, that is). 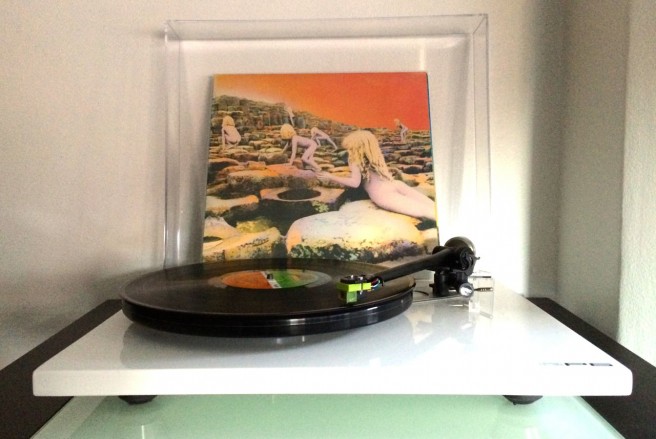 When buying old vinyl, one of my fetish is to buy first editions. Sometimes they may not be the best sounding ones, but I favour the feeling of originality, the fact that it is one of the copies that first hit the stores, that fans first listen back in the day. One of my latest acquisitions is a first UK edition of Led Zeppelin’s Houses of the Holy. Needless to say, I did not have any necessity to buy a copy of an album that I have been listening for the past 20 years. But hey, buying records is not always rational, right?

I would not dare to say that Houses of the Holy is the best Led Zep album, but surely, it is the one I have listened the most since my teenage years. Until now, I did not own any vinyl copy of it and I always rocked to The Song Remains The Same and cry to The Rain Song with the CD version included in The Complete Studio Recordings (one of my first and most precious box sets, by the way) After the mega reissues of the first three albums were announced, I got the itch to listen to some Led Zeppelin and occur to me that it was time to seek some old Zeppelin vinyl. I already own LPs versions of the first four album (even two copies of the third one), so Houses of the Holy was supposed to come next.

First editions of Houses of the Holy are not very rare and are easy to find at a reasonable price. The band was selling millions at the time already. However, I did not have any luck finding a copy in the last record fair in Helsinki, but thankfully there’s the internet and that little record collector paradise called Discogs. This database includes most of the information you need about the different editions of any particular album. Not only that, in the site sellers can list their albums for sale. Shopping the right first edition is easy. Too easy.

There are 140 versions of Houses of the Holy listed in Discogs, including LPs, cassettes, CDs, and even 8-tracks. After checking the oldest, the one from the year of release (1973, in this case), the next step is to check the country where the album was pressed. For Led Zeppelin, the UK edition seems to be the original one. And of course, there is also the catalogue number, here it is K50014.

I quickly found a seller from Finland, who had a first edition listed with a good price, in near mint condition (media) and very good condition for the sleeve (just a bit worn). So click, click, click. Purchase done. Time to anxiously wait for the package to arrive.

Feel the texture, see the details

The first UK edition of Houses of the Holy is simply gorgeous, with plenty of details that satisfy the appetite for uniqueness of any record collector. First, the sleeve is in glorious matt, thick cardboard, which has a very nice feel to the tips of your fingers. Well done and the perfect format for the fantastic artwork designed by Hipgnosis. There’s more in the package, the inner sleeve is a heavy textured paper with the lyrics on it. It also has a very nice feeling.

Now let’s look at the centre labels on the actual record, one of the greatest points about vinyl collecting . On this first edition, the label just the charismatic red, white and green Atlantic labels. Later editions of Led Zep records could include the Warner logo, which does not look so beautiful. Of course, the label also says Made in UK. 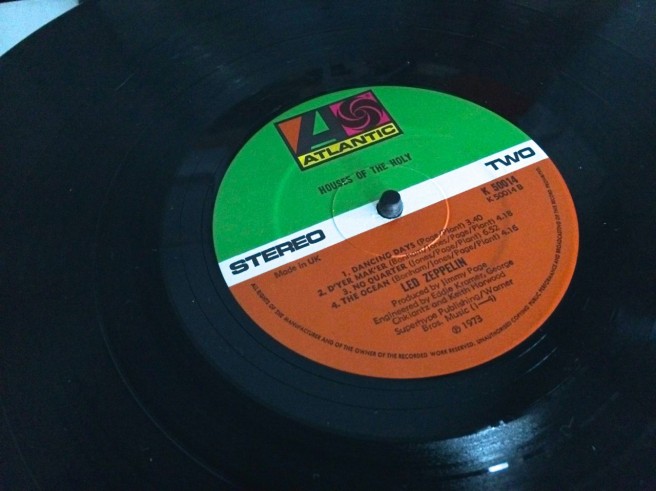 Sleeve, checked. Labels, checked. Here comes the geeky part. That is the matrix identifiers handwritten or stamped on the runout of the vinyl to identify where was the pressing done or who did the mastering. Sometimes, this is a good way to check if the actual vinyl belongs to the sleeve. In the case of the first UK edition of Houses of the Holy, the matrix information is:

This tells us again the catalogue number (it matches with the numbers on the sleeves) and that Sterling was the pressing plant. On the runout of this album it also reads RL, which are the initials of Robert Ludwig, the  engineer who has mastered the recordings of almost any major artists from Jimi Hendrix, The Rolling Stones and Bruce Springsteen to Daft Punk. Obvious, he did Houses of the Holy.

Going through all these details is as enjoyable as listening to the record itself. If fact, when I received the album, I spent a good amount of time just looking at the sleeves before I play any of the music music. Sigh of relief, I indeed scored a first edition in very good condition. This vinyl is 41 years old and still plays and looks beautifully. It has the small amount of crackles and pops that give a very cool old and warm sound to the intro of No Quartet. But I’ll talk about analogue sound, crackles and pops in some future post.