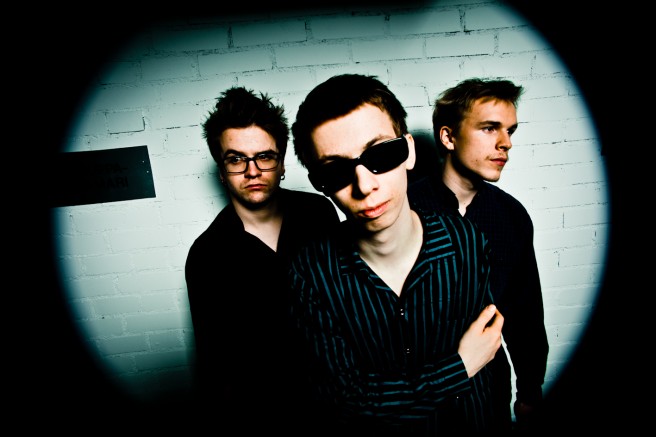 606 kilometres north of Helsinki, in the city of Oulu, there is a thrilling music scene, somehow different than in the capital area. One of the latest newcomers is garage rock trio Mushmouthed Talk, who  last year released a fantastic, high energy  debut album, Foggy Notion, via Bone Voyage. I had a little catch up with these young guys and got to know about recording in a smelly basement, why it takes balls to be in a rock and roll band and the album that bounds the band together. Read all about it below.

For those that haven’t met you yet, could you please introduce yourself?

Lauri: Im Lauri Sukanen from Oulu and I play guitar and i sing most of songs in Mushmouthed Talk

Miika: I’m Miika Moilanen from Oulu and I play the bass and sing backing vocals.

Do you remember your first rehearsal together?

Lauri: No i don’t. But it happened in the same house where we rehearse now. I think most of our first rehearsal was making a drum to Joonas so it took a little while before we found ourselves playing anything.

Joonas: Yes I do. We were just kids, me and Lauri, and we knew each other from school. Lauri decided that we were going to play together and then we spent the first day building a drum for me out of a big wine bucket. I played it with a wooden spoon. It took a while before I got my first drum kit.

How did you come up with the band’s name?

Lauri: From some English dictionary? Name is kind of genius because when you try to say ”mushmouthed talk” (especially when you are drunk), it sounds like mushmouthed talk. I realized this many years after we came up with this name. It’s also a good name to do any kind of music under it.

Joonas: It’s straight out of English dictionary. We couldn’t even realize how well it was going to suit us at the time.

Can you tell us about the recording of your first album?

Lauri: We made it in five days or so in basement of the local sport center here in Oulu. We had to postpone the sessions for a week because there were six centimetres of water at the basement floor but when they got rid of water we were ready to start. Hell of a smell!

Miika: It was really fun and fast.

Joonas: The studio was built in a basement basically, no air condition, a lot of dust and dirt. The place actually was a bit like the album is. We managed to catch the right feeling and then just played it out, song after song. The days were long and recording an album in a week sure burns you out but I enjoyed it very much.

What is the album/band that brings the three of you together?

You are formed/based in Oulu, what’s special there?

Lauri: If you want to play in Helsinki you have to drive 606 km. Thats special. But as long as we have Tuira (part of Oulu where im living) and bars like Never Grow Old and 45 Special, I’m not gonna move. I love/hate Oulu and this is raw enough city to make good r’n’r songs. And all good bands come from north like Radiopuhelimet, Tuomas Henrikin Jeesuksen Kristuksen Bändi, Ruotomieli, The Scenes, Jolly Jumpers were from Tyrnävä and 22-Pistepirkko from Utajärvi, they all have/had to drive that 606km. I don’t like bands that try to be hip and cool, rock and roll has never been about hip and cool. It takes balls to play a guitar solo behind your neck and shake your ass in front of the girls and it takes balls to play most quiet song bit out of tune in front of people and be proud of it and misbehave. I don’t know it has anything to do with that 606km but at least we got shitload of balls here in Oulu.

Miika: It’s very cold and windy and I think we have the best roads for winter bicycling.

Joonas: There are a lot of great bands based in Oulu and near it. I don’t know why, but Oulu seems to have a certain kind of effect in music. Something completely different, but with strong roots. There’s the sea and the wind. Oulu people are not trying to be something they are not. My friend once said that when you have nine dark months a year and ten out of those are extremely cold, you have to come up with a new kind of view of things.

The best thing of being in a garage rock band is…

Joonas: That you can very easily combine two of your favourite things: drinking and playing rock music.

Are you already preparing a second album? What can you tell about it?

Lauri: Yes we are! We have lots of new songs to record but not so much money. We are gonna do most of the songs in our rehearsal place by ourselves but we have already done one song with Pentti Amore (the guy who did Foggy Notion) in his studio and we have plans to do at least one song with Jürgen Hendlmeier at Hailuoto, some reggae/ska stuff with ”Oulu All Star Cats” will be on album too, and some electro. So its gonna be really mixed stuff with mixed sounds.

Miika: It’s going to be bit different than the first one.

Joonas: I think we are going to let the songs sound like the places they are recorded in. Again trying to get the right feeling out of the place and put it on the record, but now with different places and people. And of course trying to find the right place for the right song.