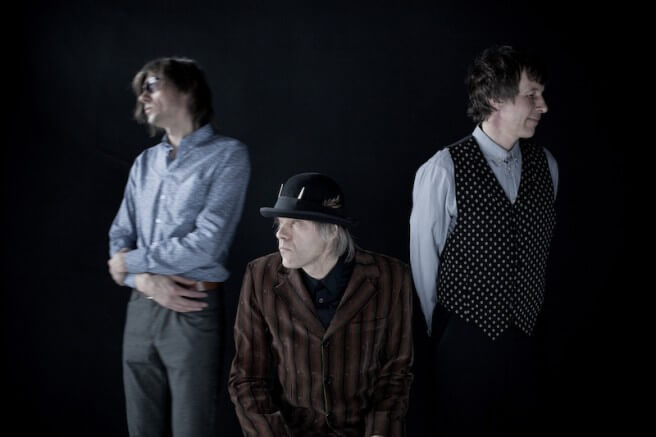 Today we bid goodbye to one of the greatest Finnish pop bands ever. After a career that have lasted more than three decades, 22-Pisterpirkko are about to take an indefinite break. I am convinced that they will comeback at some point, but still it is sad to think tonight’s will be their last show in a long while, or ever. After so many years, the band has become part of the Helsinki landscape, playing in small bars and clubs and it in major festivals across Finland and Europe, always delivering a mix of exquisite pop and raunch rock’n’roll. One had assumed this would never changed and one too many times it was easy to think about catching one of their next shows.

Some years ago, I had the chance to meet and interview the brothers P-K and Asko Keränen. They were fun and humble, happy to look back at their carer. For several hours, we talked about their albums, their chase for different sounds and the band’s beginnings in Utajärvi, a small village in Northern Finland, when both discovered the neighbour’s record collection. Soon after that, they would form the band with long-time friend Espe Havarinen and the rest is history.

From the primitive Chuck Berry/Link Wray rock’n’roll, the trio went to explore a variety of pop sounds of the highest quality to finally achieve international recognition in the 90s. I cannot help thinking that if 22-Pistepirkko would have been from Manchester, they would have been as big as any band you can think of.

As a tribute to the band, I post below some of the highlights of that interview for your reading pleasure.

Your first album, Piano, rumpu ja kukka (1984), came out when Hanoi Rocks was on the top, internationally releasing Two steps from the move produced by Bob Ezrin in the United States. How do you think your first album was received in the middle of that glam-rock scene?

Asko: Some people were happy that there was an alternative, but the record didn’t sell.

P-K: I’m not so surprised because even when there are some nice moments, it is not so good. We had some positive feedback and a lot of negative feedback, but we expected that in a way. It wasn’t a surprise.

That first record is in Finnish, but since then you changed completely to English. How was that decided?

P-K: The reason for changing our language was pretty natural. Almost from day one, one of our aims was that we should play somewhere else but in Finland. It is easier to do it if you use an international language like English.

Your sound has evolved, using more and more technology and spending lots of hours in the studio. Do you like studio work?

Asko: Yes. Our second album The kings of Hong Kong took eight months. Even when it sounds so primitive and simple, there is a lot of studio work behind it. There were lots of trials and experiments. That’s when we realized that studio work can be great. In every record it is nice to try something new.

Every new record seemed to have more electronics and programming. How did you start going in that direction?

Asko: When we started the band, we had those little Casios. Not really instruments, but we could get some bits out of it. We were composing songs from those machines and then we wanted to have a rock-and-roll band, so we did those straightforward records in the beginning. The next step was that we felt that it would be great to achieve that mixture as a band: electronics and real playing. Maybe it was the hip hop movement that amazed us. It was so fresh and cool.

What songs or artists surprised you at that time?

P-K: I was so curious about Run DMC because they were the ones using the loops. I keep on wondering from where they had gotten those sounds. It was not a drummer, it was not a beatbox. What was it? After some time I realized that they were using samples and drum loops. It was extremely interesting and it opened up various chances for making music. When you are trio you already have a few options for creating music. If you mix the trio with electronics, you have even more options. That was the main reason we decided to go with electronics.

How do you think this change was received?

There is a long history of brothers being in bands and having a lovehate relationship. How does it work in your case?

P-K: It is very simple and clear because we don’t have to pretend. We can be extremely straight with each other and even rude, because we respect each other. We can say whatever because we are just trying to make things go ahead. It is nothing personal, but if it ends up being personal we can discuss it and solve it.

Asko: We work for the music and the music is bigger than us.

Some time ago you had a big fight on-stage in Austria.

Asko: I like those fights. They are great! It just happens. Sometimes we fight.

Piano, rumpu ja kukka (1984)
This is the first album from 22-Pistepirkko. Most of the songs are in Finnish apart from some covers like Let’s Dance and Need Love. P-K explains that “It was a mixture of different kind of things. On one hand, the whole recording session was late at least one year. When we had the chance to go to the studio,
those songs were already old and we were somewhere else as a band. But we had the chance to record and we decided to make the album with those old songs. Asko admits the limitations of the band at that time: “We didn’t know anything about the studio. We were lousy”.

The King of Hong Kong (1987)
“I like it. It’s still fresh and happy”, says Asko quickly. This is the band’s first album recorded completely in English. “This is the first album that really took some time”, P-K recalls. “We got some idea of what you can do in the studio or what perhaps you should not do. We started to understand that the studio is a huge instrument”.

Big Lupu (1992)
The band goes big and it produces the hit Birdy. In spite of the success Asko and P-K agree that it was not the best period of the band. “We had a large budget for this one; let‘s make the record and not worry about the bill“,
Asko says, “We were in big studios and burning a lot of cash. I don‘t like
that period of our career so much. The songs were not ready and we had big pressure. It wasn‘t so creative. It was more like pushing the album out“. P-K agrees about the difficult times for recording: “Considering the circumstances, the final result was ok. Our producer Riku Mattila was extremely good during that period. He never gave it up.“

Eleven (1998)
The electronics and programming are already a big part of the 22-Pistepirkko sound. It is one of Asko’s favourite albums: “We did it in our studio with
our not-so-powerful-at-the-time computers. It was interesting time. It mixes electronics and Pistepirkko in a nice way”. For P-K, it represents the new methods the band always pursues: “Once again we were trying so many ways to have the songs ready”.

Rally of Love (2001)
This is probably the 22-Pistepirkko album that created the most different opinions and reactions. It is the band‘s more artificial and electronic album. “Some people think that it really sucks. That it‘s so bad“, P-K explains. “Some other people are very happy with it. In my opinion, many of the songs there are some of our best. I really like the songwriting in that album. We did it in Sweden and it was nice to work and record somewhere else than in Finland“. Asko, for his part, adds: “Maybe it got too stiff to be perfect.“

Drops & kicks (2005)
Machines are put aside and it marks a comeback to
the beginnings. P-K explains this change: “At that time, we were asking to ourselves what the nicest thing of being in a band is. Everybody agreed that it is playing together as a trio. So, we started composing by jamming, by playing as a band”. In another return to old times Asko recommends getting the vinyl version of Drops & Kicks: “It has seven more songs and a different running order. It is wilder. Go for it!”