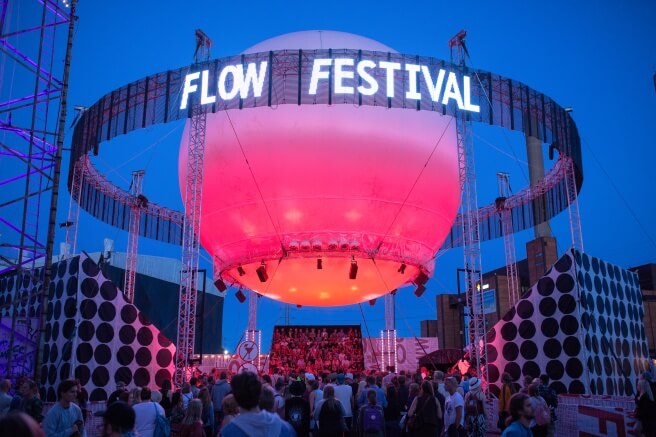 If memory serves me right, this will be seventh Flow Festival and that means many hours spent at Suvilahti listening to music. This year I find painful clashes in the schedule as many interesting gigs seem to be happening in the late hours of the festival.  In any case, here are my picks among the local artists in the program.

This year singer-songwriter Mikko Joensuu embarked in an ambitious musical project with the release of poignant album trilogy entitled Amen. The second part will arrive in November, but before that at Flow, the singer  will perform a very unique show, which includes a 15-piece orchestra and visuals specially designed for this occasion.

Since the late 90s, brothers Juha and Vesa Vehviläinen have combined electronic music and visual arts in intense live performances and groundbreaking video art. After taking part this summer in Daydreaming With Stanley Kubrick, an exhibition in London dedicated to the master filmmaker,  the live gig at Flow will be another hypnotic sensorial experience.

This is one of my new favourite Finnish bands. This trio plays well-crafted folk from the deepest of the forest. To shake things up, the band adds some rough guitar jams.

Juuso Ruohonen is meant to be one of the rising stars in Finnish rap music after the release of his debut EP Avalon.  He uses English language and the music has a captivating dark tonality that sets him apart from your regular Finnish rap.

Liima is the union of Finnish percussionist Tatu Rönkkö and Danish band Efterklang. Their debut album ii features songs written in Finland, Berlin, Istanbul and Madeira, and those places inspired surprising soundscapes and textures in a playful combination of electronica and organic sounds.

Better known as the singer of hardcore pionners Terveet Kädet, Läjä Äijälä plays lo-fi, stripped-down blues with The SultanS. Like the work of a long-lost bluesman, the music is elusive, mysterious and hard to find online, so go and see the gig.

Finnish electro-pop duo Villa Nah, consisting of Juho Paalosmaa and Tomi Hyyppä, is back with new material after a five-year hiatus. To follow-up their critically-acclaimed debut, Villa Nah will release their second album, Ultima, in September and present a new batch of synth-driven pop songs.

Ok, this is not exactly a Finnish act as it includes US-born soulstress Nicole Willis and Fela Kuti alumni and afrobeat master Tony Allen. However, Willis has been based in Finland for a very long time along with her husband and jazz master Jimi Tenor, so she’s partly Finnish, right? Anyhow, the couple will join Tony Allen to blend funk, jazz and soul in a unique collaboration. This will be their first live performance together.