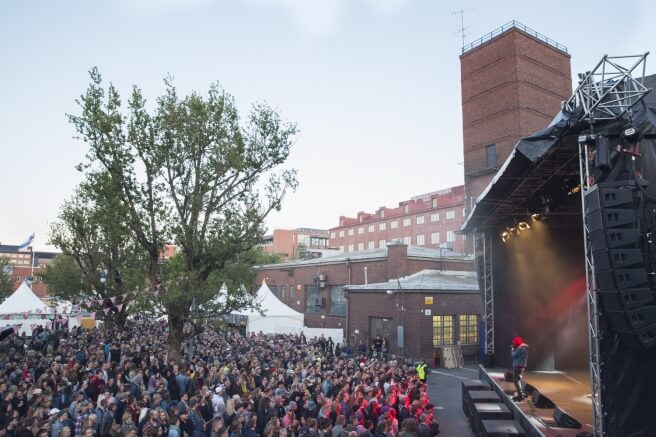 This weekend takes place the first major summer festival in Helsinki. Sideways kicks off the festival season for me. And I’m ready.

Organised by Fullsteam as an alternative version of Flow Festival, the Sideways is virtually sold out with just a handful of tickets left at the regular ticket outlets. Again, Teurastamo, the old abattoir turned culinary and urban culture centre (sic) turned festival venue for the weekend, will be packed with modern festival goers, ready to enjoy a diverse line-up, which includes plenty of hip hop, a healthy selection of Finnish underground bands, stars like PJ Harvey, noise rock, krautrock, a dose of metal and even some dirty punk rock, local and international with Ty Segall.

Ok, the program looks pretty solid for two nights of music, but please Fullsteam, can we get some sun and warm weather? Pretty please with sugar on top. Last year’s edition, the very first Sideways festival, happened during autumnal temperatures and Killing Joke’s Jaz Coleman did not need to produce his characteristic terrifying growl to produce shivers down my spine. This year the weather forecast looks promising and we might enjoy more favourable temperatures. In any case, PJ Harvey does not look like she’s going to split our throat as Jaz Coleman does, right?

Anyway,… Sideways is built around a big star, which will attract the audience with the bigger pockets of middle-aged indies. In 2015, that band was The Jesus and Mary Chain, and this year the star is PJ Harvey. This is the first time Polly Jean will play in Finland and will present her latest album The Hope Six Demolition Project. To my ears this is a solid effort, but as with her previous offering Let England Shake, I have tremendous difficulties to listen to the album in one sitting. Both albums feel, well… dull. Still, I’m curious to see her live show. She’s already in the category of once-in-a-lifetime kind of artists and I’ve never seen her on stage before.

As I already said, the rest of program is very diverse, so everyone can find something to their liking when not enjoying side activities like drinking (champagne, wine, craft beer and… ugh Heineken à 7 euro) and festival-level fine dining (burger, pizza, tacos, falafel, noodles, sushi, yummy… à 10 euro). There’s plenty of that in Sideways. Prepare your wallets!

Drinks and food are a given at any festival, but the single most awesome side activity at Sideways is the arcade saloon. Yes, classic videogames. For anyone who grew up in the 80s and 90s this is a huge deal. There’s a chance to play again Super Street Fighter II Turbo, arguably the best fighting video game ever, even thought it was very polished compared to the the original Street Figther II. I can still remember some of the special moves. How could I forget? A quarter counterclockwise and punch… Hadoken! Do you remember that? Glorious.

Another great game is Super Sidekicks 2. That was an arcade game but there was also a Neo-Geo version. Neo-Geo, the Rolls Royce of consoles. So classy, so luxurious. I never knew anyone who could offer a Neo-Geo. I only got to know about it reading magazines. Something I knew I would never own. Super Sidekicks 2 was such an addictive football game. The game included only a handful of teams and all the players looked pretty similar. Same body, maybe different skin or hair colour. Somehow the homogenous graphic were comforting. No distractions. The player movements weren’t very fluid and running was sloppy. But oh boy, the game was addictive.

You guessed it, dear reader, I’m looking forward to playing Super Sidekicks 2 as to see PJ Harvey played Big Exit. Do you want to know more? My pal Lauri covers the game selection in his Sideways post. Read it.

Let’s go back to the music. This post is called Five must-see Finnish bands at Sideways 2016 (shameless click-bait headline), so let’s get down to business.

Talmud Beach is a band to watch on a hot day while drinking a six pack of beer. Cheap, warm beer, leave that fancy craft beer for another occasion. Equally inspired by ZZ Top and Blind Willie Johnson, there’s nothing very sophisticated about these three balding bearded men playing blues rock. It’s about being shirtless and sweaty, about sticky boogie thanks to fat bass lines and subtle guitar licks.

I could tell you a few reasons why you should not miss Black Twig at Sideways. I could write about the heartfelt dreamy melodies. Maybe about the fuzzy guitars. But the main reason to see Black Twig is Blaze on a Plain. That’s the title of the band’s newest album and it is excellent. Seriously, it is. A little gem of guitar driven indie rock.

The band has been around for a few good years already but, I must admit I’ve never seen Oranssi Pazuzu live. Maybe I don’t attend enough metal festivals. The band is pushing the boundaries of black metal, entering into unexplored sonic dimensions through drone, psychedelia and a myriad of mind-bending, ear-damaging sounds. Their latest album got a 7.9 on Pitchfork and that’s super good, right?

After the implosion of Jukka Ja Jytämimmit hours before their show at Flow Festival, bassist Mara Balls went solo and put together a new band to, basically, keep on rocking, and rocking hard. The heavy bass commands speedy songs in a hallucinatory Finnish version of Motörhead.

Echo Is Your Love

In the small Finnish underground scene, just  manage to play for a long time. After an hiatus, veterans Echo Is Your Love are back. Originally formed in 1998, they played a perfect combination of pop vocals and noisy guitars. They also have the most beautiful band name.