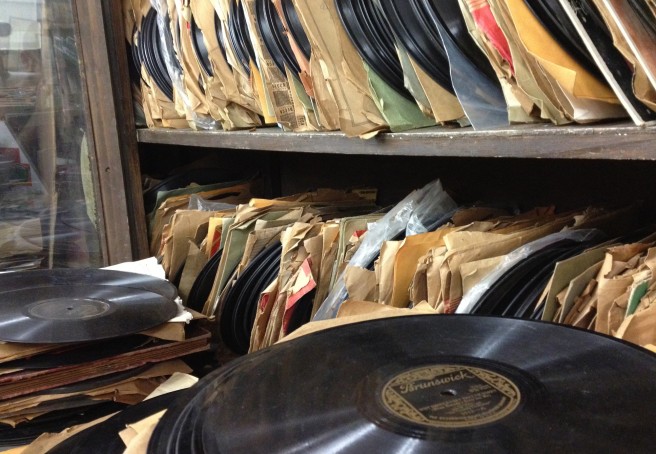 How far would you go to find a record? Would you dare to dive into the muddy waters of a river to search for records nearly a hundred years old? The ultimate collecting activity is to hunt primitive recordings manufactured on shellac before the Second World War, records of wide grooves, spinning at 78 revolutions per minute. These are the artefacts that helped preserving the blues, the folk, the country and other traditional sounds that music critic Greil Marcus described as the old weird America, the soundtrack to the first half of the 20th century.

Long before LPs, 45s and even vinyl, 78s were the standard format for recorded music, a thick ten-inch disc made out of shellac, with one song on each side. Even for the most devoted record collector, this format is challenging. It requires different turntable and stylus than the usual vinyl records, and 78s are difficult to find, especially in Europe. Too much trouble, too expensive, and what for? All these songs are found on CD compilation or are just one click away in any streaming service. Who would want to collect these heavy, scarce records?

I reached out to New York based music writer Amanda Petrusich for more information about the fascinating and wild world of 78rpm records. She is the author of Do Not Sell at Any Price – The Wild, Obsessive Hunt for the World’s Rarest 78rpm Records, a fascinating, funny book about those peculiar individuals seeking these records for years. I asked her why she was so attracted to 78s. “I liked how 78 collecting forced me to slow down a little”, she told me. “These records are difficult to acquire, they’re difficult to play, and then when you finally get one home and on your turntable, it requires a little tending-to. You have to engage with it on its own terms. I was listening to so much music, and it all felt so disposable to me, and this was such a profound antidote to that.” 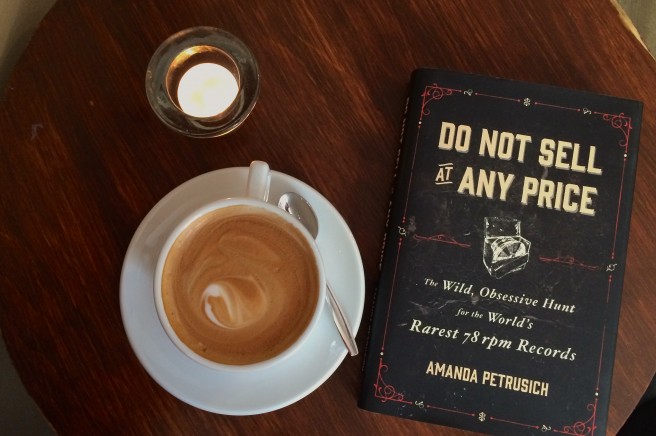 Amanda’s book is the tale of the world’s biggest 78s collectors, past and present, but it is also the writer’s own exploration of this world. She traveled to meet the collectors and finds her way into their collections to hear first hand rare records of which there might be only two or three copies in the world. In the search of records, Amanda not only visited the mandatory dusty flea markets, but also learnt to dive and she dipped into the Milwaukee river in Wisconsin, hoping to find some of the 78s that the employees of Paramount Records, the record label known for its pre-war jazz and blues recordings, tossed into the river after the factory closed back in the early 1930s.

I admit it. While reading the book I felt jealous of listening to those record, to see collector Joe Bussard, dancing in his basement with 15 000 records, some of them being  the world’s rarest records. It is easy to feel very jealous of listen to records in Joe Bussard basement. Nevertheless, what really disturbed me is that I felt total to her quixotesque enterprise of diving into a river, looking for records. I am willing to do it myself. Is the impulse of finding rare records, like Paramounts, ever over, I asked her. Apparently not: “I wish I could say I finished the book, stood up, brushed myself off, and moved on – but I’m still looking for and collecting records.”

What was the most remarkable moment during her quest, I asked her. “[collector] Chris King played me a record by a Cajun guitarist named Blind Uncle Gaspard. I’d heard him before – he has a track on Harry Smith’s Anthology of American Folk Music, with Delma Lachney – but I’d never heard “Sur Le Borde de L’Eau,” which I consider his masterwork. It completely destroyed me the first time I heard it. I’m not sure I’ve ever recovered”.

By the way, this obscure song is now a little bit more famous since it was part of the True Detective TV show soundtrack. It is a heartbreaking song.

Even though, I do not own any 78 record from the 1920s or 1930s, I am very attracted to American music from that period. There is something very soothing about listening to that distant music trough the recording’s crackles, pops and hiss. It sounds real, and simply put, much of it is damn good music.

Since the 1950s, 78s collectors have gone hunting for those lost recordings from the 1920s and 1930s. They’ve travelled to flea markets, backyard sales, abandoned houses or just respond to the call of someone who is keeping a stack of 78s under the bed, an unwanted inherited object for many. Often, those records were not of much value. But who knows? Maybe it is possible to uncover a Charley Patton song. Nowadays, 78s are sold in auctions, in which the value of the record can reach several thousands of dollars, or just traded among collectors.

Fortunately for us music lovers, as eccentric and peculiar collectors can be, they are also extremely generous and often share their collections in the form of compilations. On her book, Petrusich documents how the first wave of record collectors, like James McKune, also served as curators, saving many songs and artists from complete oblivion. If it would not have been for the passionate and obsessive hunt of music collectors we might not have heard the anguishing growl of Charlie Patton or the lament of Geeshey Wiley. As Petrusich explains “In the 1950s and 60s, record collectors began reissuing rare 78s from their private collections on LP, which ultimately opened this music up to the rest of the world – before that, there was literally no other way for anyone else to hear these particular songs and performances. That’s how Jimmy Page first heard the blues: on LP, not 78.”

However, the writer also argues that collectors created a subjective narrative as they favoured certain artists. Today’s image of the bluesman, as friend of the devils, is greatly shaped by the role of collectors. “Collectors did us all a remarkable service, of course, by saving and reproducing these records, but they also wrote a subjective narrative; collectors collected and reissued the music that they liked, so what we know of that era reflects their those idiosyncratic tastes. It’s not exactly an objective narrative. Collectors tend to be unusual, somewhat quirky characters, and their preferences, for the most part, reflect an interest in esoteric, marginalized artists.  And now that’s what we know about the blues.”. 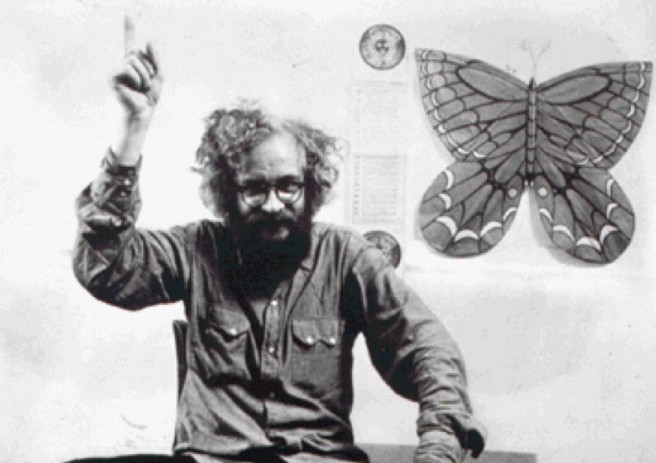 Arguably, the most important collector in the 1950s was Harry Smith. The eccentric artist and filmmaker from Portland, Oregon curated the seminal Anthology of American Music in 1952. Three volumes of recordings of the 1920s and 1930s that would become one of the biggest influences in the folk revival of the 1960s. For anyone that listens to it, the Anthology has a great power of attractive, it is something more than a simple collection of old songs. It is the heart and the backbone of traditional American music. A big fan of the Anthology, Amanda told me that “Harry Smith compiled the Anthology of American Folk Music in 1952; he was one of the first collectors to commit his collection to vinyl. Smith had a singular taste and sense for the kinds of narratives that could be sussed out from folk songs, and he tells a story about America at a particular place in its development. It’s hard to say what makes the Anthology so special. In part, he was just a master sequencer. He places songs in relation to one another in a way that established a continuum, a story.“

It is not uncommon for collectors to extend their research beyond the music. For example, collector Christopher King accompanies his compilation with very well thought and researched liner notes. The context, the story is as important as the music Amanda realised: “I was so surprised by how much essential primary research gets done by 78 collectors, and how rigorous their standards are. Most collectors will do everything they can to learn as much as they can about a certain artist or genre or label – acquiring the performance on shellac is just one component of the hunt. Understand how and where a piece of music came from, what it means or meant in its original context, who made it and who they love and what they looked like and where they died – it took me awhile, but now that’s all come to deeply enhance my appreciate of a song.”

Yes, I have read about it, it is not easy to collect 78s, but I still want to try and do my own discoveries, even though I do not have thousands of dollars to spare. I asked Amanda if there was any chances to start this hobby in 2015. She admitted that it is very difficult to break into this hobby nowadays. “It is somewhat elite! It’s a really tough hobby to break into in 2014. The rare records cost enormous amounts of money and don’t trade hands very frequently. But of course, if you follow your tastes – and collect what you like versus what’s rare or valuable – I think there are still plenty of great, affordable records out there.”

Nevertheless, I am still a rookie. Every time I have seen a pile of 78s, I felt overwhelmed by names of artist I do not know. Of course, it would be cool to own an original Charley Patton record, but I have not come up with any wish list. For Amanda Petrusich, this question is clear: “My favorite song, hands down, is Geeshie Wiley’s “Last Kind Words Blues.” Christopher King, one of the collectors featured in the book, was the first to play it for me on 78 (there are maybe three known copies), and it was a transformative experience for me. If I could make a wish for one record, it would be that one.”.

Do you want to know about old 78 records?